Prue had grown haughty and terribly vain,
She looked down on people with snobbish disdain.
A trait she had learned from a pompous relation
(Who back in the day had been quite a sensation).
Aunt Scarlett bought Prue such extravagant things,
Like clothes from Armani and Tiffany rings.

“No outfits from Tesco or second-hand toys,
For flaunting your labels is one of life’s joys.”
Her aunt reassured her, “It’s sort of a sport.”
(Another ‘life lesson’ Aunt Scarlett had taught)!
“It shows you have breeding, a sign of your status.
Those poor common people, no wonder they hate us!”

Her mother and father sat down with their daughter
To try and undo what Aunt Scarlett had taught her.
They showed her that labels were largely a sham,
A way to hike prices, a marketing scam!
While some brands were worth it and certainly finer,
The bulk were all made in the same part of China.

Her parents’ good sense led to tantrums and tears,
The girl was determined to outdo her peers.
Her aunt’s inculcation had been unremitting,
And Prue had accepted, completely unwitting,
Aunt Scarlett’s long list of the things she would need.
She soon had the same predilection for greed.

Each Christmas and birthday became an ordeal
For both of Prue’s parents, who started to feel
That nothing they bought for their daughter would do,
She’d be disappointed, a fact that they knew
Was caused by Aunt Scarlett’s immoderate spending.
They told her to stop, but it seemed never ending!

Then one day Aunt Scarlett’s largesse caused a scene
Involving young Prue, who had just turned sixteen.
They went off at dawn to browse Selfridges’ sale,
And queued up for hours in the midst of a gale.
And what, you may ask, were they hoping to snag?
Some shoes by Manolo with matching handbag.

But when the doors opened, a stampede ensued.
“But we were here first, oh how horribly rude!”
Complained Prue quite loudly as people pushed past.
“We stood there for ages and now we’re in last!”
Aunt Scarlett was punched as she fought for a skirt,
While Prue was knocked over and seriously hurt.

As Prue lay in hospital badly concussed,
The thought of the brawl filled the girl with disgust.
She’d no longer care if her aunt was impressed
By how much things cost or the way that she dressed.
What mattered were memories, made with her friends,
Not brand names or labels or transitory trends. 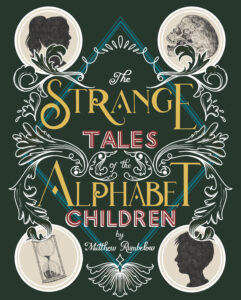 The Strange Tales of the Alphabet Children

My 8 year old is revelling the delicious downfalls of the various children. We particularly like the lottery effect of will they/won’t they die. Loved every page.